The Annual List of Obligated projects report is a requirement of the Fixing America’s Surface Transportation (FAST Act) legislation enacted by Congress on December 4, 2015. This document responds to the FAST directive, and lists all transportation projects in the Rockingham Planning Commission region to which federal funds were obligated during federal fiscal year.

Publication of Annual Listings of Projects:

“An annual listing of projects, including investments in pedestrian walkways and bicycle transportation facilities, for which Federal funds have been obligated in the preceding year shall be published or otherwise made available by the cooperative effort of the State, transit operator and metropolitan planning organization for public review. The listing shall be consistent with the categories identified in the TIP.”

FHWA defines “obligated” as “the federal government’s legal commitment (promise) to pay or reimburse the states or other entities for the federal share of a project’s eligible costs” (Financing Federal Aid Highways Glossary, March, 2007). It is the commitment to reimburse an entity (usually the New Hampshire Department of Transportation or a transit agency) the incurred costs for an approved project during the fiscal year. This reimbursement can be for projects that have been initiated in previous years, or will not be completed until future years, and the final cost of a project may be different from the amount obligated as well.

The MPO publishes the Annual List of Obligated Projects for the region in December each year.

For summary purposes, projects are grouped into one of three categories: 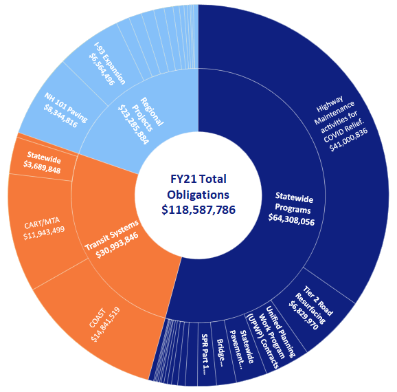 The sunburst chart to the right displays the relative share of obligated funds to each of those three groups of projects/programs. The charts below shows ten years of annual obligations to each group and the five-year average trend. FY21 Obligations for regional projects were lower compared to FY20 due COVID-19 disruptions as well as the completion of several large projects in the MPO region. Funding obligated for Statewide Programs increased substantially from FY20 as NHDOT continues to focus on improving the condition of the existing system. Transit obligations decreased slightly in FY21. This was due to a completion and closure of several older multi-year grants. Transit funds reflect $11 million in obligated COVID-19 relief funding to the three transit agencies while the Statewide Programs reflect just over $41 million in obligated funds.

The FY21 List of Obligated Projects provides the complete listing of projects funded during the year including total funding amounts and remaining funds available for each project.